Can government deficits be financed directly by central banks, as modern monetary theory suggests? The question should not be if but how much.

All things are poison, and nothing is without poison, the dosage alone makes it so a thing is not a poison (Paracelsus)

Modern monetary theory (MMT) has in recent weeks been strongly criticised by leading Keynesian macroeconomists: Paul Krugman (here too), Kenneth Rogoff and Larry Summers. This reaction is surprising, as the theoretical core of MMT can be easily reconciled with standard macroeconomic principles.

If one focuses on the macroeconomics of MMT—leaving aside the associated proposal of a universal job guarantee—its core idea is that government deficits can be financed directly by the central bank. Conventionally, governments have financed their deficits by issuing bonds sold on the capital market.

The confusion can be explained by the fact that, so far, the mechanisms of MMT have not been presented in a simple macroeconomic model. A framework which allows the basic mechanics of MMT to be described is provided by the textbook ‘IS/LM’ model.

The model consists of two markets: an aggregate goods market (the investment/saving or IS curve) and an aggregate financial market (the liquidity-preference/money-supply or LM curve). It defines an equilibrium point between them at a certain aggregate output (horizontal axis) and a certain interest rate (vertical axis).

If one assumes that a deficit is caused by additional government spending, the higher demand for goods shifts the IS curve to the right (Figures 1 and 2). This effect is independent of the financing of the deficit. If the deficit is financed traditionally, by issuing bonds, the money supply remains constant and the LM curve is unchanged. Together with the upward shift of the IS curve the interest rate then goes up (Figure 1) and the higher public expenditures ‘crowd out’ private investments.

In the case of MMT—where the additional government spending is directly financed by the central bank—the LM curve shifts too. Suppose the government pays an invoice to a construction company. To do so, it makes a transfer from its central-bank account to the account of the construction company with a commercial bank. This transaction increases the reserves of the bank as well as the deposits of the construction company. Thus, the monetary base (reserves of commercial banks with the central bank) and the money stock M1 (deposits of private households or companies with commercial banks) increase. In the IS/LM model, the resulting increase in money supply causes a downward shift in the LM curve.

Overall, direct central-bank financing magnifies the expansionary effects of additional government spending (Figure 2). It avoids, at least in part, the rise in interest rates that is caused by capital-market financing (unchanged LM curve) in this model. The financial crowding out of private investors that Krugman fears can be at least partly avoided (LM1). Depending on the extent of the shifts in the IS and LM curves, crowding out can be fully avoided (LM2) and the result may even be an interest-rate decline (LM3), which would lead to more private investment. Abba Lerner, the 1943 inventor of functional finance, explicitly addressed this possibility of a ‘crowding in’. 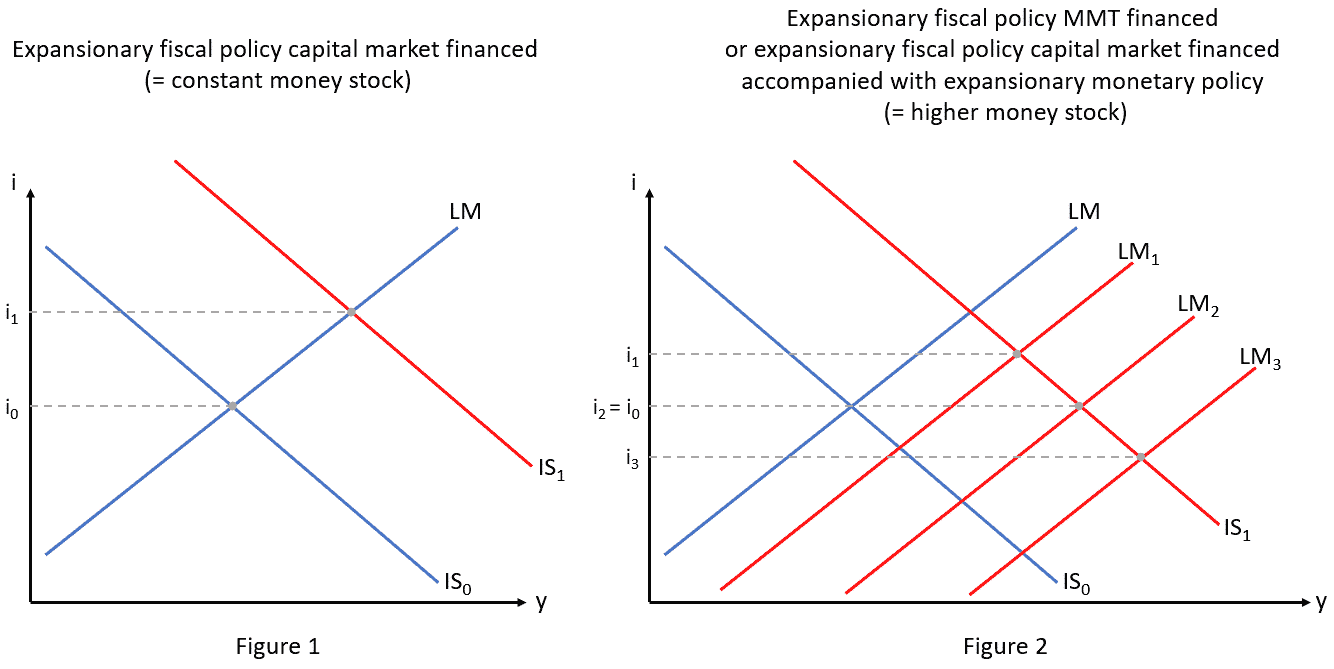 Interpreted in this way, the effects of MMT financing do not fundamentally differ from the monetary policy pursued in Japan for many years. There, the government financed huge deficits traditionally, issuing sovereign bonds on the capital market. By purchasing these bonds from non-banks—insurance companies, for instance—in its large ‘quantitative easing’ programmes, the central bank generated an increase in the money supply (higher bank deposits on the part of non-banks) and the monetary base (higher reserves of commercial banks with the central bank as a corollary of its increased liabilities with non-banks).

As with any therapy, so with MMT—the dose makes the poison. The example of Japan makes it clear that such a policy can be carried out even in a fairly high dosage without leading to inflation. In fact Japan is still in a deflationary environment. In addition, there was never an indication that the record high government debt had a detrimental effect on the trust of international investors in the Japanese currency.  On the contrary, the exchange rate was too strong for most of the time, rather than too weak.

In essence, MMT differs from the macroeconomic policy operated in Japan for years only in that it provides for a coupling of expansive monetary and fiscal policies. In Japan, by contrast, the two policies are effected separately, albeit in a quite co-ordinated manner.

Given such a sober look at MMT financing, it is surprising that leading economists have responded so aggressively to this concept. Rogoff speaks of ‘all the nonsense about MMT’. He quotes the chair of the Federal Reserve, Jerome Powell—‘The idea that deficits don’t matter for countries that can borrow in their own currency I think is just wrong’—and adds that the deficit idea is ‘just nuts’.

But it’s always a question of the right dose. Especially in the years 2009-12, Japan, the United Kingdom and the United States were running very high deficits, which obviously did not matter to them. And, with massive bond purchases from non-banks, the central banks of these countries provided the parallel expansion of the money stock which kept interest rates at very low levels. 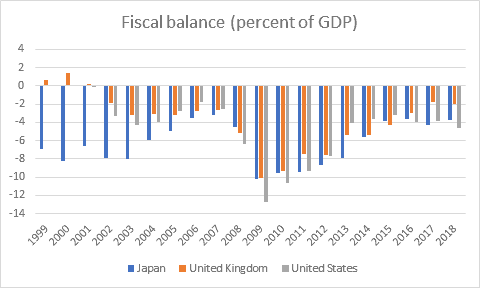 With the simple model presented here one can also respond to the question posed by Krugman—how expansionary fiscal policy will lead to lower and not higher interest rates. It is the shift of the LM curve that matters. The model shows furthermore that there is not necessarily a trade-off between monetary and fiscal policy, as both curves can be shifted independently.

Summers regards MMT as ‘a recipe for disaster’. He points to the dismal experiences of emerging market economies—‘As the experience of any number of emerging markets demonstrates, past a certain point, this approach leads to hyperinflation’—and that of France in the European Monetary System in the early 1980s. But, of course, the deficit-spending concept of MMT is only applicable to very large economies with a flexible exchange-rate regime.

He also mentions the problems of Italy and the UK in the 1970s. They increased their deficits at a time when their inflation rates were already very high—11 per cent in Italy and 9 per cent in the UK in 1973. MMT should only be applied in a low-inflation environment.

Today, in addition to Japan the best example of very effective MMT deficit spending is China. If one does not look at the official fiscal deficit but at the deficit which includes the borrowing of local governments, the country has maintained a deficit of over 10 per cent for years. So far, there are no signs that China has to worry about this. 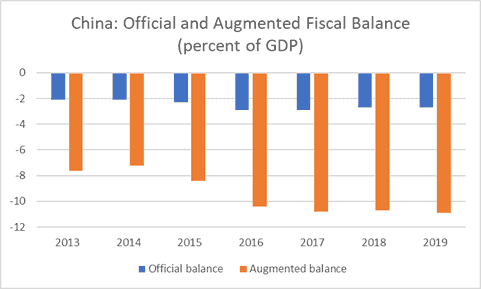 In the whole controversy about MMT, the critics and proponents should agree on two points. First, a consensus should be possible around the basic idea of functional finance, as presented by Lerner:

The central idea is that government fiscal policy, its spending and taxing, its borrowing and repayment of loans, its issue of new money and its withdrawal of money, shall be undertaken with an eye only to the results of these actions on the economy and not to any established doctrine of what is sound and unsound. The principle of judging only by the effects has been applied in many other fields of human activity, where it is known as the method of science as opposed to scholasticism.

And both sides should also be able to agree that the combination of expansive fiscal policy and expansive monetary policy is a very powerful tool, which should be used if needed and at the same time handled with great care. Once again: it is the dose that makes the poison.