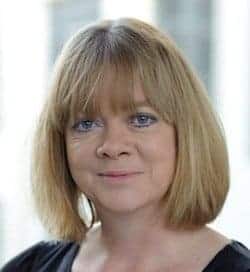 Inequality is emerging as a central issue for the post-2015 development agenda and the establishment of the sustainable development goals. Inequalities in income and wealth cause economic instability, a range of health and social problems, and create a roadblock to the adoption of pro-environment strategies and behaviour. Social and economic inequalities tear the social fabric, undermine social cohesion and prevent nations, communities and individuals from flourishing.

The Impact of Inequality

Social and economic inequality increases the power and importance of social hierarchy, status and class.1 As a result, a long list of problems more common further down the social ladder – in poorer neighbourhoods for instance – are much more common in societies with larger income differences between rich and poor.2-4 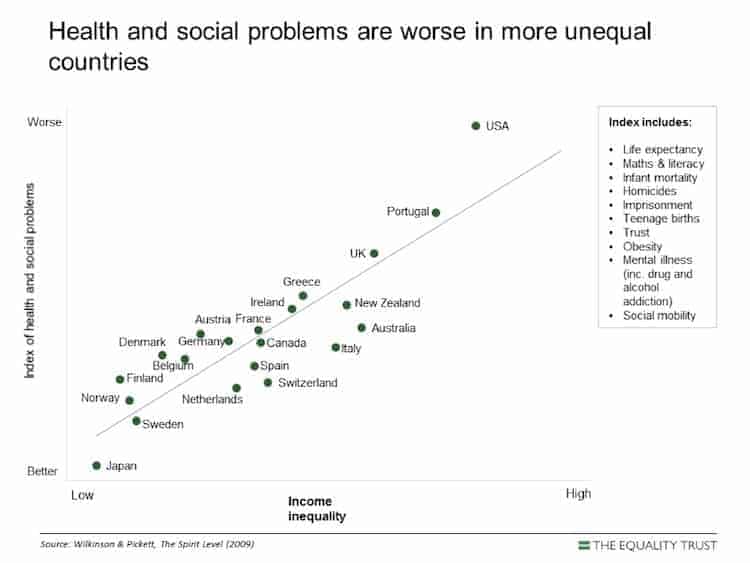 Although the impact of inequality tends to be most severe lower down the social ladder, outcomes are worse even among the better off, because inequality damages the whole social fabric of a society – increasing social divisions, status insecurity and status competition.2  Indeed, it is because a large majority of the population – not just the poor – are affected by inequality that the differences in the performance of more and less equal societies are so large.  The scale of the differences varies from one health or social problem to another, but they are all between twice as common and ten times as common in more unequal societies compared to more equal ones.

Although in the rich, developed countries, income inequality is related to indicators of health and social wellbeing, levels of average income (GDP per capita) are not.  Reducing inequality is the most important step these countries can take to increase population well-being.  In the developing and emerging economies, both greater equality and improvements in standards of living are needed for populations to flourish.

A large and well-established body of evidence shows that very large income differences within countries are damaging.  Analyses include both cross-sectional research and studies of changes in income distribution over time.  There is a particularly large body of evidence linking greater inequality to worse population health; hundreds of studies show us that life expectancy is longer, and mortality lower, in more equal societies 3 5-9, rates of infant mortality, mental illness and obesity are two to four times higher 4 10-13 and, in both developing and developed countries, HIV infection prevalence rises with inequality 14 15.

There is also substantial evidence linking greater equality to better social relationships within societies –levels of social cohesion, including trust and social capital, are higher in more equal countries 16-20. Indicators of women’s status and equality are generally better 1 21 and rates of both property, crime and violence, especially homicides, increase as income differences widen 17 22-27.

In addition to its impact on health and social outcomes, greater equality is also linked to economic progress and stability.  Poverty reduction, and hence development, is compromised by income inequality 31 32. In rich and poor countries, inequality is strongly correlated with shorter spells of economic expansion and less growth over time 33 34 and with more frequent and more severe boom-and-bust cycles that make economies more volatile and vulnerable to crisis 34.  As an International Monetary Fund report put it – reducing inequality and bolstering longer-term economic growth may be ‘two sides of the same coin’ 33.

Income differences can be reduced via redistribution through taxes and benefits, or by reducing differences in pre-tax incomes.  The international evidence suggests that greater equality confers the same benefits on a society whether it is achieved through one of these approaches or the other.1

In general, top tax rates, which in many countries – including the USA – were over 80% in the 1970s, have been reduced dramatically and there is room for more progressive tax to be restored.  Dealing with tax havens and other methods used by rich individuals and large companies to avoid tax is crucial; the amount of money lost by developing countries to tax havens exceeds all international development aid.40 41 This not only increases global inequality but also means that a higher proportion of public expenditure has to be funded by tax payers in lower income groups.  In many countries taxation has ceased to be significantly redistributive.

Forms of economic democracy, such as employee ownership, employee representation on boards, employee share ownership, mutuals and cooperatives tend to reduce the scale of income inequality and help equality to become more embedded in a society – these are more long-lasting cultural changes than can be achieved through tweaks to the tax code. These forms of business institutions also provide a more stable basis for community life and perform well in ethical terms.

Given all that we now know about the effects of inequality, it seems clear that we should both monitor inequality and commit to realistic but courageous targets to reduce it. A core objective of the post-2015 development framework and the sustainable development goals should be to reduce inequality within countries. 42 The frameworks should include a top-level goal to reduce inequalities, including income inequalities in particular. This should be in addition to disaggregated indicators and targets in every other goal to ensure equitable progress across different social groups towards agreed development objectives.

An inequality target could be based on Palma’s ratio of the income share of the top 10% of a population to the bottom 40%. In more equal societies this ratio will be one or below, meaning that the top 10% does not receive a larger share of national income than the bottom 40%. In very unequal societies, the ratio may be as high as seven. 43 A potential target could be to halve national Palma ratios by 2030, compared to 2010, and dramatically reduce the global Palma ratio, which is currently 32.

Prioritising the need to tackle inequality in this way will ensure that economic and development strategies are truly inclusive and can drive human progress towards sustainability and wellbeing.

1. Wilkinson RG, Pickett K. The Spirit Level: Why Equality is Better for Everyone. London: Penguin, 2010.

15. Over M. The effects of societal variables on urban rates of HIV infection in developing countries: An exploratory analysis. Confronting AIDS: Evidence from the Developing World. Brussels and Washington, DC: European Commission and World Bank 1998.

30. Blanden J. How Much Can We Learn From International Comparisons of Intergenerational Mobility? London: Centre for the Economics of Education, 2009.

This column was first published in the Journal For A Progressive Economy. See also our focus page “What is inequality”.

Kate Pickett is professor of epidemiology, deputy director of the Centre for Future Health and associate director of the Leverhulme Centre for Anthropocene Biodiversity, all at the University of York. She is co-author, with Richard Wilkinson, of The Spirit Level (2009) and The Inner Level (2018).