Workers in Ireland are still bearing the brunt after the Celtic Tiger’s demise—but with a modest gain against the precarisation of work. 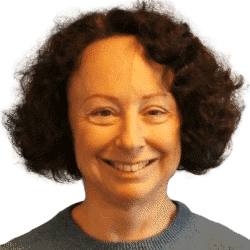 Ireland was labelled the ‘Celtic Tiger’ in the 1990s, when the economy of Europe’s former ‘poorhouse’ began to grow rapidly, fostered among other things by foreign investments attracted by low taxes on profits. In 2008 the financial crisis hit the country and its workers badly and unprepared. A precariat existence remains part of everyday life, even a decade later.

The impetus for the awakening of the Celtic Tiger was billions of subsidies which flowed from the European Union into the country during the 1970s and 80s, mainly from the structural and cohesion funds. Ireland thereby offset the weak fiscal effort of what became its 12.5 per cent corporation tax rate, the lowest in the EU. Annual growth in gross domestic product ranged between 7 and 10 per cent. Unemployment fell from 15 per cent in the mid-80s to a low of 5 per cent.

The Celtic Tiger legend was destined for self-destruction. The dizzying growth of the Irish economy was not the result of deregulation and privatisation or lower income taxes for private individuals. A root cause of Irish prosperity was the low tax for companies. The combination of continued low interest rates and the generous lending policy of the banks made it advantageous to buy properties on tick. When the real-estate bubble burst in 2008, households became heavily indebted.

All of a sudden, the Celtic Tiger had lost its teeth: liabilities and accounts receivable of Irish banks summed up to a total of 533 billion euro in 2008. The Irish government provided guarantees for the customer deposits and banks´ own borrowing to a total of 440 billion euro. The small country helped its excessively big banks with 50 billion euro. The budget deficit rose to 11 per cent, while GDP fell. Consequently, unemployment increased to more than 15 per cent. For two years, Ireland received help from the EU rescue package and carried out the prescribed structural reforms.

Today the economy is growing excessively again. The bar chart shows GDP growth between 2008 and 2018. 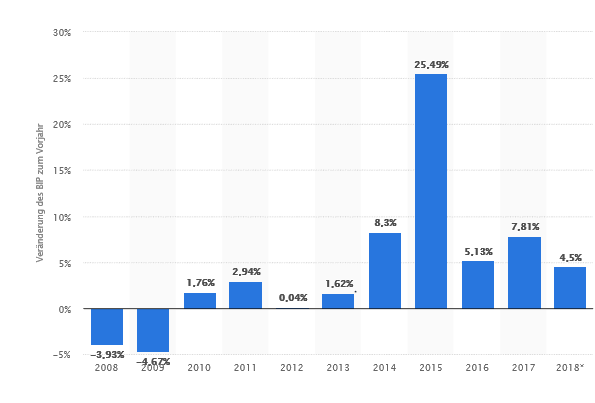 Low corporate taxation did not however lead to high labour supply or production, but motivated foreign companies to move their profits to Ireland by billing artificially high internal transfer prices or founding letterbox companies without economic activity in the country.

The ‘Irish model’ is still functioning well, as John Fitzgerald, a member of the Commission of the Central Bank of Ireland, explains. Companies benefit from the decline in wages due to the crash; the weak euro exchange rate supports exporters. Hence, Ireland has ‘exported’ itself out of the crisis.

But what about the workers? After the financial crisis, they had to tighten their belts even more: the austerity package prescribed by the government in 2011 added up to 15 billion euro, mainly of public spending cuts. This cooled down the markets, but it also threw workers into existential difficulties. Compared with the year 2007, the Irish economy has lost roughly 200,000 jobs, and wages only recovered their pre-crisis-level in 2017. Emigration and increasing precariousness of working conditions have been two factors in the fall in unemployment from 15 to the current 5.4 per cent.

The wage ratio, an important indicator of the functional income distribution, fell to 40 per cent of GDP in 2016, compared with 53 per cent in 2008. The productivity increase of about 34 per cent between 2010 and 2016 was realised at the expense of a 17 per cent decrease in wages and unit labour costs. The Hans-Böckler-Foundation found that the economic recovery had been founded upon low wage growth.

David Gibney from the Irish trade union Mandate puts it this way: ‘When something is sold, the revenues go partly to the employees as their salary. When workers are more productive, they see their wages increase. Ireland, however, follows a different logic: Irish employees create enormous revenues but they only get a tiny share of them as a wage. This is the reason why the feeling of prosperity is absent among workers.’

The exclusion of Irish workers from benefitting from productivity and growth is based on three pillars:

Employers use zero-hours contracts not only as a means of flexibilisation, shifting operational risk to the workers, but also to control them: they can thus supervise not only assignments and working hours but also employees’ living conditions and whether they are organised. Workers often renounce collective bargaining out of fear that any wage increase would merely lead to fewer working hours.

After several strikes, however—especially at the biggest retail chain of Ireland, Dunnes Stores—Mandate secured a ban on zero-hours contracts for nearly every sector in a new Employment Act. Furthermore, employers are now obliged to provide a statement of the core terms of employment within five days of hiring. If the employer fails to engage a worker sufficiently, he still owes him or her a minimum compensation.

In addition, employees can now ask for a ‘secure hour contract’. Employers have to follow this demand or explain why they are not willing to do so within four weeks.

As the secretary general of Mandate, John Douglas, explains the new system, normally employees of Dunnes Stores have 15-hour contracts, yet many of them work up to 40 hours a week all year. According to the new law, they can request a minimum-hours contract where the average of hours they have worked over the previous 12 months places them within a ‘band of hours’—in this case, it would be 36 hours and above. Hence, workers have more stable wages and can more easily get mortgages and loans.

This new protective framework anticipates some aspects of the reformed EU directive on transparent and predictable working conditions. The directive is an important starting point for European trade unions in achieving further improvements to workers’ rights in precarious employment conditions. It will harmonise minimum standards, with the right to a written notification on the core terms of the employment contract. As an EU-wide threshold, it will offer protection against the business model of member states which make employees a cheaper ‘cost factor’ in the European supply chain by reducing wage and ancillary -costs.

Both national industrial action and harmonised minimum standards in labour law on the EU level are necessary to stop member states and companies playing workers off against each other. Together they can show that the EU protects its workers from unfair competition.

Susanne Wixforth is head of unit in the Europe and International Department of the German Trade Union Confederation (DGB). She was formerly senior legal and economic adviser on European affairs in the Austrian Chamber of Labour (AK Vienna).