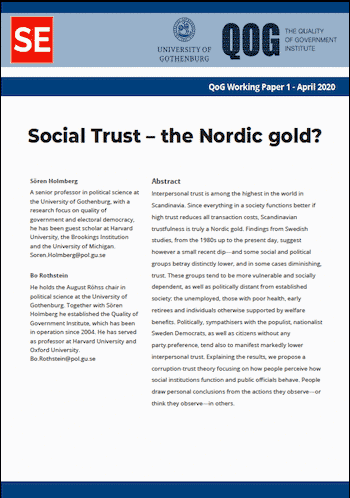 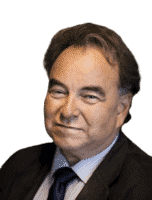 Interpersonal trust is among the highest in the world in Scandinavia. Since everything in a society functions better if high trust reduces all transaction costs, Scandinavian trustfulness is truly a Nordic gold.

Findings from Swedish studies, from the 1980s up to the present day, suggest however a small recent dip—and some social and political groups betray distinctly lower, and in some cases diminishing, trust. These groups tend to be more vulnerable and socially dependent, as well as politically distant from established society: the unemployed, those with poor health, early retirees and individuals otherwise supported by welfare benefits. Politically, sympathisers with the populist, nationalist Sweden Democrats, as well as citizens without any party preference, tend also to manifest markedly lower interpersonal trust.

Explaining the results, we propose a corruption-trust theory focusing on how people perceive how social institutions function and public officials behave. People draw personal conclusions from the actions they observe—or think they observe—in others.

Share on TwitterShare on FacebookShare on LinkedIn
Home ・ Library ・ Research Essays ・ RE No. 11: Social Trust – the Nordic gold?