Sergei Stanishev MEP is president of the Party of European Socialists. Iratxe García Pérez is president of the Socialists and Democrats group in the European Parliament and first vice-president of the PES. Ana Mendes Godinho is the Portuguese minister of labour, solidarity and social security. Agnes Jongerius MEP is chair of the PES Social Europe Network. László Andor is secretary general of the Foundation for European Progressive Studies and a former European commissioner for employment, social affairs and inclusion. Paul Magnette is leader of the French-speaking Belgian Socialist Party. 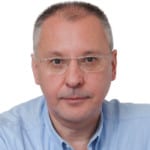