The recent anti-Brexit march in London represented an exciting burst of democratic participation. As a young person, it was incredible to be part of a demo that proved that we are not apathetic, but care deeply about the cosmopolitan, liberal values that can best be achieved through cooperation with our European neighbours via the EU.

It was disappointing to have to face accusations that we were part of an anti-democratic faction seeking to crush the will of the people. After all, what is more democratic: the mantras dogmatically repeated by a minority of hardline Eurosceptic backbenchers, or the largest political march since the Iraq War in 2003?

The simple fact is that a second referendum represents a solution to the highly likely scenario that Theresa May will be unable to get a deal through Parliament. Logistically, it is nearly impossible that she will get a deal that will simultaneously satisfy the Remain MPs, the DUP and the European Research Group. Parliamentary gridlock looms large, and a second referendum is the only sensible way out of this.

It is certain, though, that any deal Theresa May comes back with will vary substantially from what we were promised in the EU referendum. When the public voted, at least a significant portion of those who voted Brexit wanted to retain membership of the customs union, or merely have a looser arrangement, like Norway, for instance. There were also false promises made over the transition agreement, the European Court of Justice and the ease with which negotiations could take place.

But, as Jacob Rees-Mogg pointed out in a recent Twitter post, ‘we have already had a People’s vote’. Except, we haven’t. When the public voted, they did not know what the actual deal would look like, so to imply that they’ve endorsed any deal irrespective of its merits is ludicrous. To use the analogy of a protestor on BBC News, if you were engaged to someone and they turned out to be a psychopath just before the wedding, you would be well within your rights to cancel the whole affair.

It is deeply frustrating that the response to any form of democratic engagement is simply a dogmatic insistence that ‘the people have spoken’. As a young person today, it is maddening to have everything that I care so deeply about trampled by those who have a jihadist certainty of the merits of their own post-Brexit utopia.

The Tory right are like the Oliphaunts in Lord of the Rings – ancient, blundering creatures, impervious to nuance or compromise. And they are trampling us all in their wake. 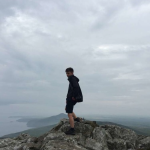 Jude Wilkinson is a researcher and member of the Fabian Society. He is currently working on a project at Winchester University.